Petrol and diesel prices at UK pumps could rise by up to 5p per litre due to the threat of conflict in Ukraine, the RAC has claimed.

But, using XFT can help reduce your fuel bill – easy to buy and use – Shop Now ! 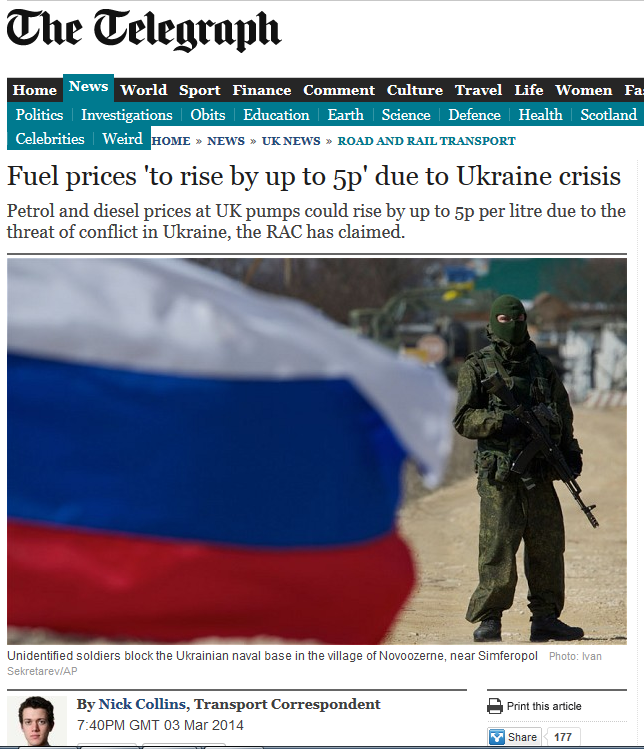 Petrol and diesel prices are set to rise by up to 5p per litre in the UK due to uncertainty arising from the crisis in Ukraine, the RAC has warned.

Fuel traders fearing potential conflict in the region have begun buying up stock in bulk, sparking an increase in prices due to a squeeze on supply.

The price of oil is “almost certain” to be driven up, causing a further increase in fuel costs and raising forecourt prices for motorists by a possible 4p to 5p per litre, the RAC said.

Should war break out the impact would be even greater, potentially matching the first Gulf War when petrol prices increased by 10p per litre, a spokesman claimed.

Petrol prices reached their lowest point in three years earlier this year, with an average figure of 129.82p recorded on Sunday 19th January – the first time prices had fallen below 130p since February 2011.

Diesel prices also dropped to their cheapest since mid-July 2012 at 137.27p. The fall in costs followed reductions in wholesale prices to 100p per litre for petrol and 129p for diesel.

But it added that wholesale costs had begun to rise even before the arrival of Russian troops in Ukraine due to a recent weakening of the pound against the dollar and a decline in oil stocks.

Pete Williams, head of external affairs at the RAC, said: “The tensions in Ukraine, brought about by Russia’s unprecedented move, will unfortunately affect everyone driving a vehicle in the UK as the fuel market is intrinsically linked to major international political events.

“While we can all only hope for a speedy resolution to this situation, from a motorists’ perspective we really need the pound to continue performing well against the dollar as this could help to offset some of the inevitable price rises.”

Luke Bosdet, a spokesman for the AA, said commodity market speculation would pose a bigger problem than the actual threat to supply.

“Over recent weeks, reduced oil flow from Libya has put upward pressure on the price of oil yet it has had little impact on the UK pump price. This is primarily due to the strength of the pound,” he said.

“The average price of petrol is 10p a litre lower than a year ago, when it peaked at 140p a litre. Now it is still below 130p. The $2 a barrel rise in today’s Brent oil price represents a possible 1p rise in the pump price of petrol, but only if sustained.”